So far, we have concentrated primarily on the external manifestations of degenerative, sustainable and regenerative systems. Underlying the eight forms of capital is another map, developed and utilized by philosopher Ken Wilbur and the international Integral community. The most basic level of the Integral framework is called the four quadrants:30

Figure 5.1 – The four quadrants. Each quadrant represents a facet of reality, and none of them can be reduced to any other. They all exist in all enterprises, whether they are acknowledged or not. 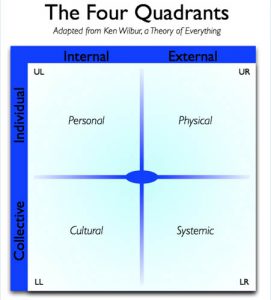 The vast majority of entrepreneurial thinking and sustainability initiatives is focused on external results.31 Financial capital profits for executives, employees and stockholders is the simple bottom line for all current enterprises. Most triple-bottom-line companies add two other factors:

The Social Entrepreneurship community creates business and organizations that focus on finding “innovative solutions to society’s most pressing social problems”.32 However, these entrepreneurs are also required to produce external financial capital profits, external social systems benefits, and external environmental benefits to prove their effectiveness. All realms of the current business world are focused on only one half of reality. Something is missing.

A tenant of the four quadrants model is that no organization, venture, or individual can achieve its aims by working solely in the external quadrants. Especially if the purpose is to develop sustainability or regeneration of whole living systems, the internal quadrants must be fully integrated into the project. For example, consider a project run by a christian missionary organization that aims to increase urban food security by helping people plant gardens near their homes.

This project could focus on getting legal access to gardening spaces, providing soil and water and tools and seeds, hosting community classes on different aspects of gardening, promoting the benefits for physical health, or perhaps even exploring the money-saving or money-making potential of small-scale crop production. The project could do all of these external things, at the highest level of quality and with the best intentions, but still not achieve its goals. Why? Because the internal quadrants of the individuals and community have not been addressed.

The people in the urban area could have a firm internal belief that growing vegetables is a dirty, lowly, menial way to spend their time, suitable only for poor farmers in the countryside. Urban youth might think that growing food is ‘un-cool’, experience peer-pressure to not get involved, or feel fear about some aspect of the project. The population could be orthodox jews, whose shared cultural beliefs are fundamentally at odds with the christian missionary organization running the project. Or perhaps some people in the area have African-american or Caribbean heritage, and connect agricultural activity with the oppression and pain of their ancestors’ slavery.

Without exploring, understanding, and actively addressing the internal aspects of the people and communities involved in a project, wholeness cannot be achieved. Enterprises cannot succeed at regeneration without both the external and the internal.

Zooming out to a larger, societal scale, internal individual preferences and shared cultural beliefs often have their root in painful and oppressive historical events. Many of the original colonists of what is now called the United States were fleeing from religious persecution – they were Christian protestants who had been systematically mistreated for attempting to follow their own beliefs. This left deep psychological, emotional, and intellectual wounds on each individual. They fled to a “new” land where they could have freedom from oppression, and then immediately repeated the pattern by systematically mistreating, stealing from, and killing the native peoples of the continent, who were following their own beliefs.

In fact, this oppressive pattern of colonization goes back even further. In the country now called Great Britain, pre-”european” indigenous people were colonized and conquered by successive waves of Celts, Romans, and Germanic peoples.33 In each case, the older cultures and languages were dominated and mostly destroyed by the colonists. A similar story exists for almost all of the countries in modern-day

Europe, and the large-scale cultural wounds inflicted were never addressed or healed. During the so-called “discovery” period of the 15th and 16th centuries, these unhealed wounds of violence and colonization were carried onwards across the ocean – Europeans dominated and destroyed much of the cultural, spiritual, and living capital of what is now called North America.34

The oppressed became the oppressors. Culturally, this trend continues today.

Agriculturally, this trend also continues today. The fossil-fuel-driven shift towards large-scale industrial food monocultures impoverishes each of the places it touches and the people who live there. The degradation of ecosystem services and living capital is oppressive: Humans systematically mistreat the environment around them for material or financial capital gain.

Our belief is that most of the current global society is based on oppression: the systematic mistreatment of one group of people or form of capital by another group of people or by the society as a whole. The primary oppression is financial, wherein the few people that control the vast majority of financial capital actively (but usually unconsciously) destroy living capital and perpetuate artificial divisions between human beings based on their skin color, country of origin, gender, age, or other factors to achieve continued financial capital accumulation.

The financial inequality currently present in the world is held in place by racism, sexism, age-ism, and other oppressions that insidiously separate people from each other35 and prevent them from supporting each others happiness, health, and multi-capital wealth.

This system hurts every person on the planet. People who are targeted by oppression are systematically denied access to resources, verbally and physically insulted, and treated as inferior human beings. Sometimes the oppressive ideas and messages will become internalized by people who are targeted by oppression, and then acted out upon themselves and other people in the same targeted group. For example, many women in the current society receive the incorrect and oppressive message that they “are not smart” or should “keep quiet” from a young age. Some women come to believe this about themselves, and may act to invalidate or discourage other women who display their intelligence or voice their thinking. This is called ‘Internalized Oppression’, and is one of the major barriers to ending oppression in the world.36

Each of us is a part of this system. The multiple forms of oppression keep people divided from each other, while living capital degrades and financial capital disparity increases around the globe.

Whether each individual likes it or not, each individual carries wounds, prejudices, and rigid ways of acting and thinking from growing up in this oppressive system. No individual would choose this system of inequality had they not been hurt and unconsciously trained into perpetuating it.

Ask yourself: Would I choose to design a world where 50% of the people will suffer malnutrition,38 48% cannot speak or act according to their faith and conscience due to harassment, imprisonment, torture, or death,39 and the collective actions of humans on our planet threaten 66% of all the world’s living species with extinction this century?40

Again: no individual consciously chose to systematically degrade the living, social, cultural, and spiritual capital of the world. And, it is not the fault of any person or any particular group of people. All people are inherently good, but as a resulted of being systematically mistreated (as young people, as women, as men, as darker-skinned people, as jews, as muslims, as christians, as indigenous people, as communists, as capitalists, etc.), people seek to release their wounds by systematically mistreating the earth’s living capital and the social, cultural, and spiritual capital of other peoples in order to achieve a false sense of safety and separation from the oppression they have undergone.

There are many communities, schools, and modalities of personal development. Entrepreneurs engaged with them report the following results as they work to heal their internal landscape:

Each individual in a regenerative enterprise must commit to ongoing personal internal development. Ideally, the individuals develop an ecology of personal growth and healing modalities, ensuring continued emotional, intellectual, and spiritual development.

30 Wilber, Ken. A Brief History of Everything. Boston: Shambhala Publications, 199+.

Economy.” Annals of the American Academy of Political and Social Science,

37 Jackins, Tim. Working Together to End Racism: Healing from the Damage