In 2009, the authors developed a new economic map to fully conceptualize and account for the world’s multiplicity of resource flows: The Eight Forms of Capital.13 Even as the soils erode away, biodiversity plummets, and ecosystems reel from the shocks of species loss, fragmentation, and climate change, economists and governments insist that economies must ‘keep growing’. How is this possible? Can our global society truly continue to grow forever?

The infinite growth required by our current global system is primarily an infinite growth of one form of capital: financial. The Eight Forms of Capital economic model recognizes that there are other forms: social, material, living, intellectual, experiential, cultural and spiritual capital. We propose that the ongoing growth of financial capital is only possible through the loss of other forms of capital.

The current global society is organized and controlled primarily through the flow of financial capital, but the survival of any human or society depends primarily on living capital and the material capital that arises from it: food, water, energy, and shelter. It is the cooperation and collaboration of people in the forms of villages, tribes, regions and nations that support each other to successfully gather these provisions of ecosystem services and transform them into the goods and services that underly the global economic system.

Pools of capital can be held and developed by multiple entities, and various flows can occur within and between each form of capital: 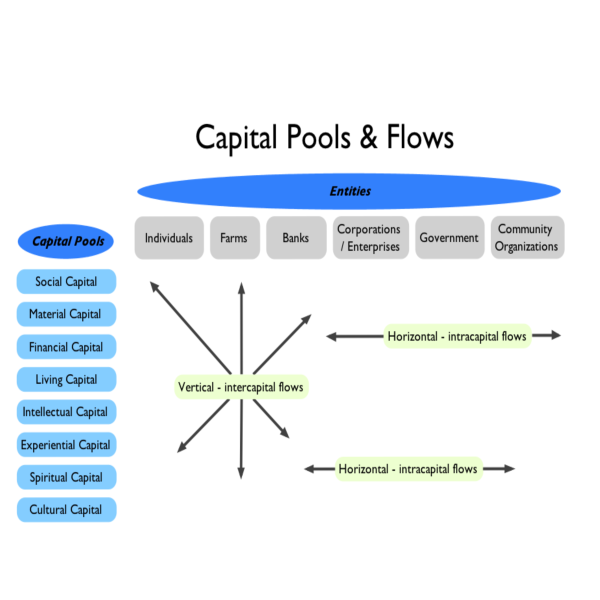 The sum total of global inter- and intra-capital exchanges is the current economic system. The international trend is to deplete the pools of most forms of capital while exponentially increasing the amount of financial capital. This mono-capital trajectory has significant impacts on the sustainability of current and future generations.